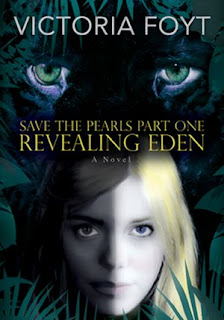 Eden Newman must mate before her 18th birthday in six months or she'll be left outside to die in a burning world. But who will pick up her mate-option when she's cursed with white skin and a tragically low mate-rate of 15%? In a post-apocalyptic, totalitarian, underground world where class and beauty are defined by resistance to an overheated environment, Eden's coloring brands her as a member of the lowest class, a weak and ugly Pearl. If only she can mate with a dark-skinned Coal from the ruling class, she'll be safe. Just maybe one Coal sees the Real Eden and will be her salvation her co-worker Jamal has begun secretly dating her. But when Eden unwittingly compromises her father's secret biological experiment, she finds herself in the eye of a storm and thrown into the last area of rainforest, a strange and dangerous land. Eden must fight to save her father, who may be humanity's last hope, while standing up to a powerful beast-man she believes is her enemy, despite her overwhelming attraction. Eden must change to survive but only if she can redefine her ideas of beauty and of love, along with a little help from her "adopted aunt" Emily Dickinson.

My Thoughts::
I was so happy when I got the chance to read this book! I've read plenty of dystopians, but none of them have dealt with race. I was automatically interested to see what the author would do with this idea and see what else she would bring to the table that I haven't seen.

Since the new big thing in books is dystopian, authors have been writing tons of them. Still, each time I am pleasantly surprised with how original the book is, including this one. They are always so fresh because there is some new history, back story, or world to explain. It is so fun to learn about the downfall of the world they once knew.

Like I said before, the race thing was really really interesting. Not because it was sort of switched, but because the darker skinned people were actually better fitted for the environment. Also because the light skinned people tried to be darker and were ashamed of who they were. It's sort of scary to think about. Most dystopians make we worried about something.

Eden did a number on my nerves at times. She would seem to get a grip on herself and her situation and I would be proud of her, but then she'd continue to do stupid things again for no good reason. It took her forever to actually learn from her mistakes. There was a long stretch where I saw no growth in her, or when she did grow, she would revert back to her old self on the next page, but during the last bit of the book I really liked her. I could sympathize with her confusion and other emotions.

Overall I think this book had decent characters, an exciting story line, and an original plot.
Posted by Amanda at 9:00 AM

Pages Read in February Week 4::
The S-Word by Chelsea Pitcher

Me, Him, Them, and It- Caela Carter

Books In My Reading Pile